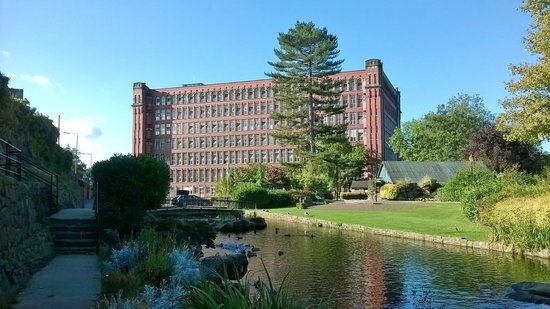 Lost Histories first-ever documentary was filmed in Belper Derbyshire. The documentary follows a poem written by Belper Poet Thomas Crofts in 1850. The poem A Pen and Ink Sketch of A Derbyshire Town. Is a journey around Crofts home town of Belper.

Thomas Crofts was locally known as the Belper Poet he lived from 1815 –1904 and spent all his life in Belper. He wrote one book of poems “A Castle In The Air and Other Poems” (Figure1) which was published by Bemrose and Sons and currently out of print. This book can be downloaded from here

A charming aspect of the book is the photograph of Thomas Crofts.  This photograph which forms part of the Preface was taken by Jacob Schmidt (1831-1893) of New Road, Belper. Jacob Schmidt who originally was from Nassau, in Prussia, Germany. He emigrated to England and became a naturalised British Subject. [1]

Very little is written about Thomas Crofts, and his life as a poet and I stumbled on his poetry quite by chance, while conducting a research project on Belper.

Crofts Poem ‘A Pen and Ink Sketch of A Derbyshire Town’ of 1850 takes special pride and place in a short documentary Lost Histories of Belper.

A Pen and Ink Sketch of A Derbyshire Town

The “A Pen and Ink Sketch of A Derbyshire Town” poem by Thomas Crofts 1850, with beautiful use of old English and local use of words. I have not altered the dialect or spelling as you see here.

The town of which I’m writing stands on a rivers side,

It has streets both crook’d and narrow, and others straight and wide.

And high and costly warehouses like stately mansions seem.

It has nail shops past my counting, where men and women toil,

Making “Roundheads,” ”forties,” “clinkers,” for the tillers of the soil.

It has churches new and spacious, fitted up with bench and pew,

And of dissenting chapels, it containeth not a few.

It has schools-infant, national governmental, voluntary,

And a “union” and a lockup just the state of things to vary;

It has workers, countless workers, at the anvil loom and frame,

Yet it holds no lordly mansion,’though it boasts a titled name.

It has gas in great abundance, and yet it’s streets are dark,

And water bright and gushing at a fountain in the park.

It has a railway running through it, with trains both up and down,

And a station house to walk to, near a mile from out of town;

But if you’re in a hurry, and are wishing off to start,

The bus may take you just in time to see the train depart.

It has inns and beer shops plenty, where men have drunk and drowned

Their reason and their sorrow till their giddy brains went round.

It has a fair and statues, market and market place,

Which is a standing monument, of somebody’s disgrace.

It has doctors, clever doctors, who will potion and will pill you,

And if they cannot cure you, be assured they will not kill you.

It is the town I cherish, all other towns above,

For it holdeth those that love me, and those I fondly love;

Tis bounded on the westward by a lofty mountains side,

While to the southward spreadeth, a valley rich and wide;

On the east rich coalfields lie, with gems of wealth in store;

On the north are lime stone mountains, where miners dig for ore.

If then I have described it, according to its fame, Ere this the reader doubtless has given it a name..

When I shot this documentary I was considered wet behind the ears in terms of planning. With the help and guidance of Andy Rokita, an established filmmaker of more than twenty years I was able to shoot this documentary.