The first day of filming the Druids Pilgrimage took place in Stanton Drew, with members from the of Dobunni Grove, from the Order of Bards, Ovates & Druids (OBOD). We had several members to interview and a Standard Peace Ceremony to film. All in all, it was going to be a very busy day.

The first day of filming the Druids Pilgrimage took place in a highly decorated meditation room of Adrian Rooke. With a skeleton crew of four, we interviewed Adrian, a Druid from The Order of Bards, Ovates & Druids (OBOD). He is also the press officer for the order and one of the longest standing members of the Dobunni Grove, which is named after the pre-Roman Celtic tribal rulers of the Gloucestershire area. The Grove extends as far as Devon from Gloucestershire.

Adrian is an instantly likeable guy who stands over six feet tall, yet has a quiet unassuming manner and very spiritual in his being. I had asked Adrian to answer five questions, which will lift the drama into a docu-drama. In the editing stage segments, these answers will be included in the docu-drama.

2 – Why do Druids celebrate ceremonies and rituals?

3 – Why is an Oak so revered amongst Druids?

4 – Why are the solstices so important to Druids?

5 – What was the Druid Revival?

If I asked five Druids the same questions above, I’m sure I would get five different answers, as there is no right or wrong way of answering them. Each Druid bases his reply on his own interpretation. All these questions and the answers by Adrian will be available online in October 2019.

What Did I learn from the answers?

What did I learn from the answers? In reality, a Druid is a person who must have enough strength and integrity to put into practice that which he learns. It is not enough to have the energy to achieve one’s ends in Druidism. Clear instructions are necessary to do what needs to be done and put in place what one needs.

The questions asked of Adrian were as water flowing; his answers sparkled like diamonds sparkling in a tree. Although we didn’t speak of Druid magic, he cast a spell on the film crew, taking in his words of wisdom. We ended up floating in the euphoria of magic.

Once we asked these interview questions it was time to move onto the Stanton Drew meeting point, where the rest of the filming crew and the other Druids waited for us. Thus, the interviews and the filming of the ceremony was attuned to begin shortly.

I met and talked with each Druid for thirty minutes prior to talking about the schedule of the day. It was refreshing to be part of something that spiritual it put the hair on end on the back of my neck.

We all walked to the Stanton Drew stone circle, which is located just outside of Stanton Drew village, in Somerset. The Great Circle is the largest circle among the Stanton Drew Stone Circles and the second largest in Britain. A moat and small circles of stone surround it. A group of three stones called The Cove is also part of the stone circles. A single stone known as Quinte d’Hautville is located a little further from the Grand Circle. Some of the stones forming the stone circles are still standing but the majority are lying. Sadly, some are missing.

2 – What does being a Druid mean to you?

4 – In what aspect has Druidry improved your being?

5 – How has Druidry changed your life?

We had a whole crossover of Druids to interview from those who were learning about Druidry over a year, to those who have been Druids for over twenty years. Each one gave me a true reflection of the answers instead of telling me what I wanted to know. I can honestly write that they all gave authentic answers.

What I learnt basically was, Druidry is a way of managing and connecting to the natural, spiritual, and physical world. Whether Druidism is chosen over the other, is a personal connection with divinity or deities, perhaps geographical location and heritage, and a structure whose histories resonate in the mind. The heart.

For some, Druidry is a fundamental part of their own chosen path. It is above all a path of an intimate waking relationship with everything they encounter. Day by day what they encounter most is the landscape, humans and spirit forms.

One can better become a Druid, in part, by living in the consciousness of how one’s lives affect the balance of the ecosystem. It does not require a puritanical rejection of the modern world, but it does lead Druids to look for fewer damaging ways of living – a greener life.

Some Druids take inspiration from a greener life and live off the grid; grow their own food, recycle just about everything, and buy second-hand goods.

Other Druids use technology, live in society and act from within trying to make it a more honourable, more sustainable, more ethical society. The two ‘sides’ are each Druid, yet each Druid lives a very different lifestyle.

Deep Green Druids can rely on a wood stove to heat and feed his/her family, while the techno-druid can have central heating, triple glazing and a solar roof. Looking hard on each of them, one is the direct cause of localised particulate pollution and the loss of windfall woods that are home to many creatures, living an island lifestyle impossible to reproduce by the entire population.

One Druid avoids carbon transport and counts on feet and bicycles and the canal; lives in a caravan or a narrow and looks only at the modern world when necessary. The other will use the technology in the awareness of the consequences but also in the understanding that the improvements in engineering and invention offer a solution to the ever more pressing demands of an increasingly growing population.

But all the Druids interviewed have a waking, conscious and personal relationship with the world, in which complete argumentation from one side or the other has been and will continue to be developed.

I had asked Adrian if we could film a short ceremony, which he delightedly agreed to. I think what was most difficult for the Druids who were part of the ceremony were how many times they had to do the same scenes over and over again. Take after take to be able to make a little film to show what a standard peace ceremony looked like.

I remember halfway through the ceremony, I doubled up monitoring sound, the sound kept on jumping in and out, but I could not in my heart say “Cut” because the ceremony needs to take its course. What I’ve learnt is filming a ceremony is not a staged event and, is not there for the cameras.

When I spoke to Andy Rokita about the sound issue, I remember him telling me I should have cut before they finished the ceremony. Even though Andy is my long-time mentor in making films, I knew I had done the right thing to let the ceremony take its course. The ending of the ceremony must be just as important as the beginning and the middle. The respect has to be there as I felt the energy in the ceremony circle.

I knew the sincere call of peace to each cardinal point is a call for us to set aside conflicts, forget personal desires, to unite in a purpose. They defined space and declared sacred for their ritual, that space be effective must be a place of peace. What they consider the cardinal points we were explained, is not a simple request or hope for peace, it is in effect, a declaration that there will be peace throughout the world.

I knew then with the sound issue I set aside being a filmmaker and became a pagan first. I’ve always known I was a pagan, but making this documentary, is an important journey for me. A journey of self-discovery and of learning, that there is more out there than we know. 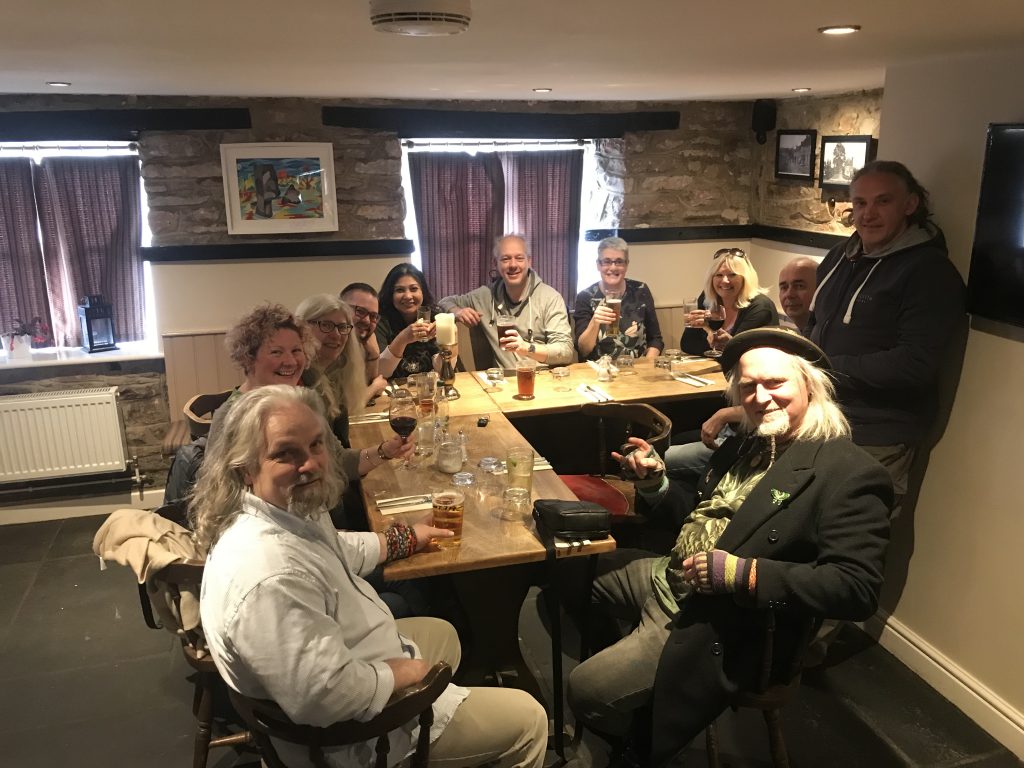 What was great for me as a filmmaker, was the start, the middle and the end, we started off with a cup of tea and ended up with a pint of ale at the local pub in Stanton Drew, which was named the Druids Arms. 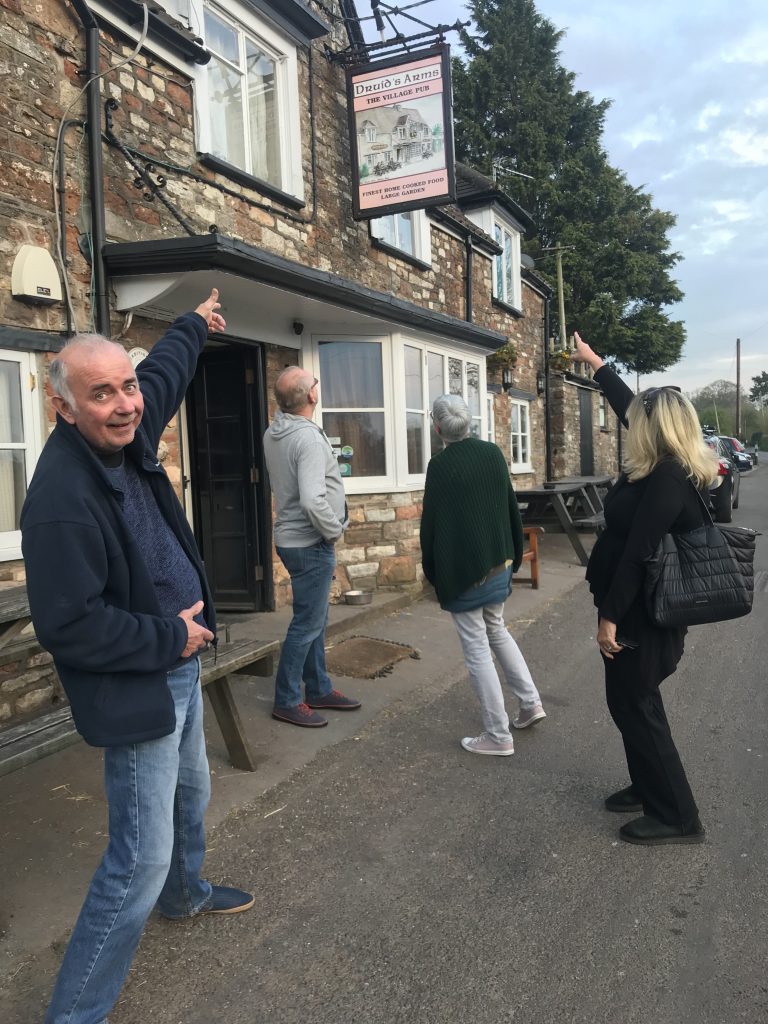 Why become a Druid

An Interview with Quill the Druid