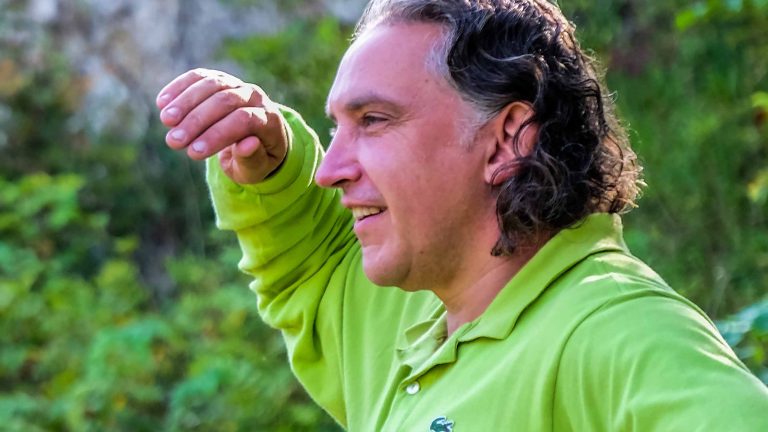 Roland “Roly” Keates is a middle-aged English producer, director, and scriptwriter who is currently researching in the post-production of his fourth documentary film, “A Druid’s Pilgrimage.” His debut documentary was shot on a canon 5d mark I and tells the story of how the market town of Belper, Derbyshire had its roots in the cotton industry. Since then Roland researched, produced and directed a documentary on the history of the Romans in Derbyshire and more recently researched, directed and produced the heritage of dry stone walling in Derbyshire. All these films were made for under £5,000 and were never picked up from any tv production company or history channel.

Roland didn’t go down the usual route of filmmaking by going to film school; he decided to study photography instead. While Roland was studying filmmaking, he was given the assignment to produce a set of photographs in a theme.

Roland is quite the thinker and thought about the project for days until he came up with making a set of Lobby Cards for a fictitious film. Roland in his ultimate wisdom decided to contact film producers in the Derbyshire area and one production company Theodore Films, got back to him to say they were just about to go into post-production.

He took his camera for the duration of the shooting and took plenty of stills to be able to create a set of lobby cards, and two weeks later he had produced a set of nine cards, which still he has in his procession. Since that meeting Andy Rokita the owner of Theodore Films and learned filmmaking by watching, doing, and learning. Ten years later, Roland is still learning from a veteran filmmaker.

Roland always has a solid researched script, a business plan, a committed team, a “reasonable” low budget (£5,000), some industry connections and a degree of momentum to participate in the festival circuit. According to the Andy Rokita textbooks, everything was ready for success.

It’s been a hard journey working 60 plus hours a week in a regular job, researching content, taking time off to meet up with others with many promises, numerous meetings, false starts, phone calls, thousands of emails, multiple rewrites, and various “attachments” from cast and crew members, and money being tight.

Suddenly, My wife and I made many sacrifices to be able to put money away to make films; we even split up from it, so does making documentaries have no value? Had I caused a series of debts just because of my ridiculous dream?

I believe in destiny, and I don’t believe in abandoning things, so it was difficult for me to accept defeat. After a few months of sadness, I came up with a new plan: I would like to make low budget documentaries with a book to support it, a thesis to show my supporting researching and to enjoy every minute of it. I had pressed the reset button committing myself to do something personal and honest. This new lease in thought happened in November 2016, by October 2017 “If Walls Could Talk” was produced.