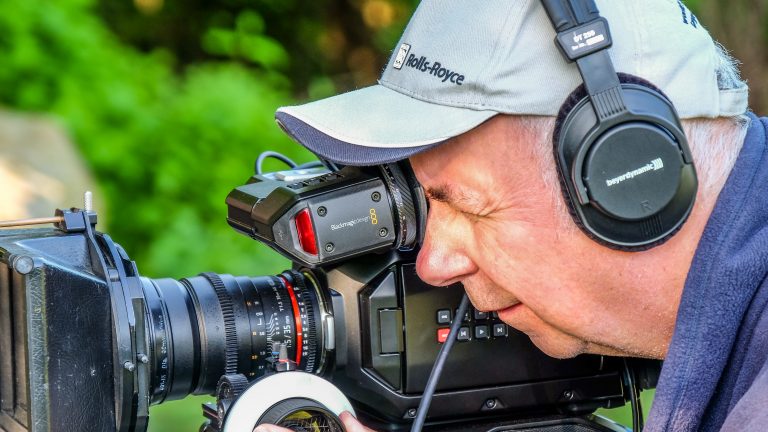 Andrew Rokita BA (Hons) Film & Television Production FBIPP or better known as Andy is our Cinematographer and Editor for Lost Histories. He is a Pro-active and passionate filmmaker that just loves the medium both in his professional capacity, but also for Theodore Films where the remit and approach are entirely different yet still handled with the same degree of professionalism.

Alongside this Andy has a keen interest in cinematic history and local documentary-making/heritage.

Andy discovered cinema when he was already a teenager: he was raised in Derby, and eventually moved to Bournemouth to attend the university to study Film Making. From that moment, he learned everything he could about the art of filming (through books, watching films and doing), and financed his first jobs through work as an industrial worker.

With Andy main job as a filmmaker for Rolls Royce, he can boast of having shot on all continents: throughout Europe, Asia, Africa, America, Antarctica, and Oceania. Andy films thus become not only a perfect substitute for books and for those who find it difficult to get up from the sofa but he’s an endless source of anecdotes ranging from the weird to the climaxal.

Andy uses unknown actors in many of his films, and one reason is cost, but with the growing expense of making independent films for a niche market, he has made many a household name. Andy has won numerous awards, and he knows what he’s doing: from the beginning of his career, and between short films. He has helped me to produce documentaries with themes ranging from historical to the unusual.

The truth is that Andy has been a very prolific writer (with a life like his, no wonder), but every time he has moved to a blank page has been to put the finger on the sore. Andy writes his scripts like most; however, he hones in very well into a theme he has set himself. I have often been out on the walk with him and his lovely wife Sian, and he goes, and he looks around the environment, and he is writing his new script in his head.

Andy is a real trooper to have on the team.

To find out more about Andy Visit his website https://www.theodorefilms.co.uk