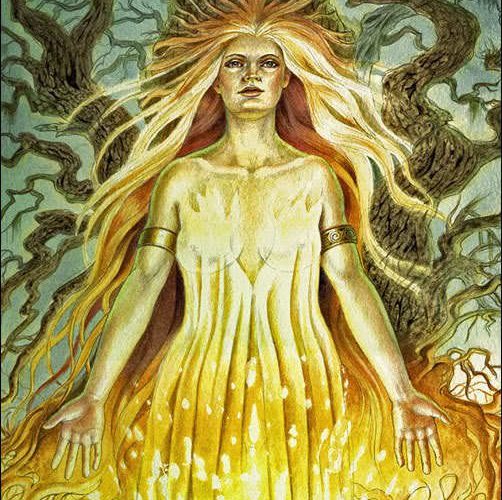 Brigit, a woman of wisdom

Who was Brigit? It is not easy to answer this question, we have lost sight of its mythical history origins. In late times it is difficult to distinguish the Celtic Goddess from the Christian saint of the same name.

Nevertheless, it is perhaps a quality of Brigit, not to be able to be categorized easily. Because in the tradition of the Goddess and the saint, she seems to have been the omnipresent benefactor. Benefiting all aspects of the lives of people and of the country. We can say that Brigit is the closest to the Great Mother of the Celts. 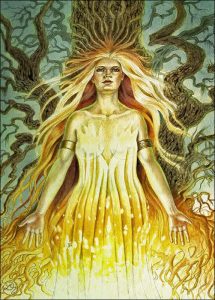 Variations in the name

Its name has many variations: Brigid, Brighid, Brid in Ireland, Bhrighde and Bride in Scotland, Ffraid in Wales and Breeshey in the Isle of Man.

A 10th- century Irish glossary describes the Goddess Brigit as one of the Tuatha Dé Danann, the Isle of Dagda. She was believed to be the mother of the three gods of Danu, which may reflect an ancient tradition “Matrix”, predominantly female. The author, a Christian monk from Cashel, Cormac, calls her “a woman of wisdom” … a Goddess whom poets adore because her protection is very great and very famous.

Poetry, lidecht, was inseparable from clairvoyance, Brigit considered as the great inspiration behind divination and prophecy. Brigit the source of oracles. Cormac mac Cuillenain also writes that she had two sisters. Brigit the doctor and Brigit the blacksmith – but it is generally believed that they were all three aspects of a triple goddess of poetry, healing and forging, which are magical arts of transformation.

Elsewhere, Brigit is considered the Goddess of other important arts of Celtic society – dyeing, weaving and brewing – and she was a keeper of farm animals, especially cows.

Brigit is deeply associated with Ireland, and Irish rivers still bear his name. She had two oxen called Fea and Feimhean, who gave their name to one plain in County Carlow and the other to Tipperary.

She was the keeper of Torc Triath, king of wild boars, whose name given to Treithirne, a plain in western County Tipperary. These three totem animals uttered a warning cry if Ireland was in danger.

In the mythical history of the Tuatha Dé Danann, she was the daughter of Dagda and the wife of her enemy, King Fomoir Bres. Celtic specialist Miranda Green considers her to be “an ancestral deity, a Mother Goddess whose main interest was the well-being of Ireland”.

However, the simplest illustration of his guardianship over the country comes from popular tradition, which says that Brigit spread her greatcoat over his beloved country, and thus made it the Emerald Isle.

Find out more about Goddess movement